Howdy, y'all! This is an exciting couple of days for me, because I just completed my first ever full illustration 100% in Flash and it's going to be on the cover of this month's Beer Advocate Magazine! Unfortunately I can't show you until the issue is printed (next week, I believe), but in my effort to find a picture to post I discovered this piece of ancient history: 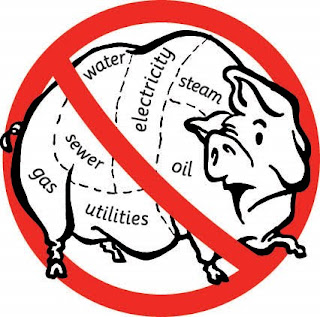 My unpublished logo/character design commissioned by Harvard University from 2006! I don't think I've ever shown this to anybody. At the time, Harvard was developing an energy conservation campaign in which they wanted an "energy hog" to be their logo. My first book binding teacher, Marcia Ciro, was their designer and she contacted me to design the hog. I got very excited about designing a grotesque and miserly hog, with folds of skin and fat... 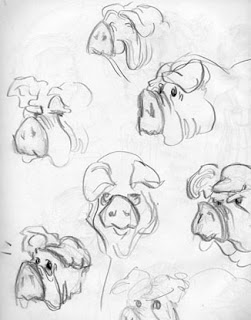 ...but in the end they wanted a cuter, simpler design, which became the above. And then they scrapped the whole idea, supposedly because they fell out of love with their own campaign concept. I'm not entirely sure what put the kibosh on the project, but this was my first freelance job and it was an excellent experience.

Now that I think of it, this job is a great example of the good things that can come your way if you work hard and make a good impression in all areas of your life. I think I was one of the very few students in that particular book binding class that took it seriously (rather than considering it a blow-off elective credit) and Marcia remembered me. I cannot stress enough how professionalism, kindness, and honesty have paid off for me, in ways I never saw coming. I've been blessed with positive experiences and opportunities, sometimes simply because I was nice. Food for thought!

Anyway, I'm really looking forward to next week and I have a big post in store! Until next time!
Posted by ETCIllustration at 2:39 PM