Beer Advocate has released its new issue, which means I get to show off my latest illustration! In honor of my fancy cover illo, I wanted to share my creative process with y'all.

This month's BYOB editorial, called "The Changing Face of Homebrewing," focuses on the decreasing age of the average homebrewer and how younger people's involvement in technology and online social networking changes the nature of homebrewing as a community activity. I thought this was a fairly challenging theme to depict visually, so it was fun to play with ideas. I sent the AD (hi, Taylor!) the following three thumbnails: 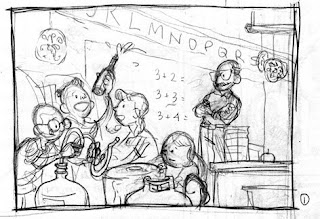 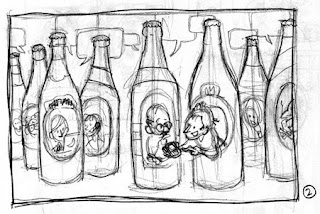 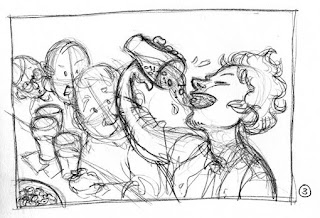 The first thumbnail captured the message of the increasingly younger homebrewer, and everyone thought it was a strong image, but it wasn't entirely successful in illustrating the theme of the editorial. The third one is more on track conceptually, but visually it's difficult to read (that's a beer made of 1's and 0's he's drinking). The AD and I both agreed that the second thumbnail successfully drew the parallel between the older and younger brewer while still addressing the theme of technology AND it still made an interesting image. On to final sketch! 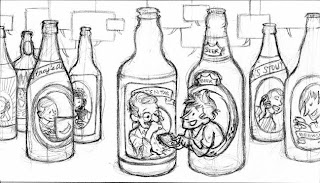 Since this was going to be a more complex composition, I decided to draw it out on paper before moving onto the computer. I then scanned it and opened it in Photoshop where I made a color study: 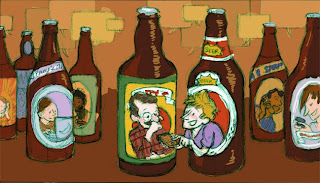 It can be easy to use over-saturated colors while working digitally--especially since I strive for saturation when I watercolor--so for this particular piece I wanted to focus on muting the palette a little to maintain consistency between my traditional and my digital work. I picked a colored line rather than my usual black and I opted for a somewhat monochromatic palette. 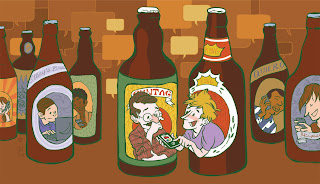 I'm pretty pleased with how it turned out, seeing as it's my first complete Flash illustration. I imported the original drawing into Flash and used it like I would a lightbox, tracing over the drawing with a crisp, "inked" line. I'm not familiar with gradients yet, so I created texture by painting patterns within the flat areas of color.

At around the final sketch stage, the AD apparently liked where it was going enough to decide to use it for the cover. After I delivered the final, she cropped the illo and altered the colors a little to fit the color scheme of the cover design: 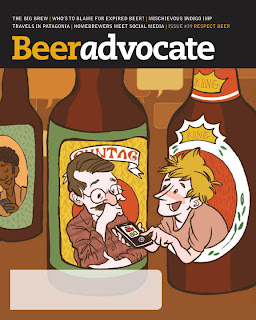 I'm usually pretty stubborn and don't like it when people fuss with my work, but I'm really pleased with the changes she made. I love both color versions, and I'm thrilled that both are printed in this issue!

I hope you enjoyed this little glimpse into my creative process. Now go grab yourself a copy of Beer Advocate and oogle the artwork in print!
Posted by ETCIllustration at 5:25 PM