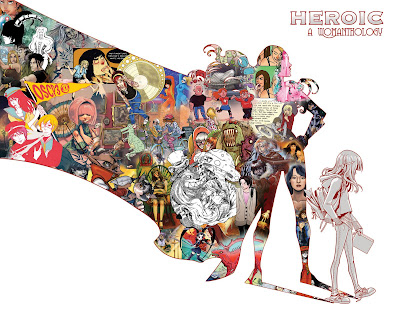 Hi, all! So, you see that little nugget of info on the left, in the Current and Upcoming section? The one called, "Womanthology?" Yeah, so that's something awesome, but I haven't really told y'all about it yet! Allow me to remedy that...

Womanthology is an upcoming book, a collection of comics created by women from all professional backgrounds--novices, seasoned pros, and everyone in-between. The idea is to raise money for charity while at the same time highlight women in an industry that is primarily dominated by men (comics). I'm very excited and honored to have been asked to take part in the project!

Tonight we launched a kickstarter campaign to raise funds for publication. Please help support us by donating and/or spreading the word about the project! There are some really killer rewards for certain pledges, such as comic cameos and original art, so make sure to check it out!

*Image by Renae De Liz
Posted by ETCIllustration at 7:56 PM