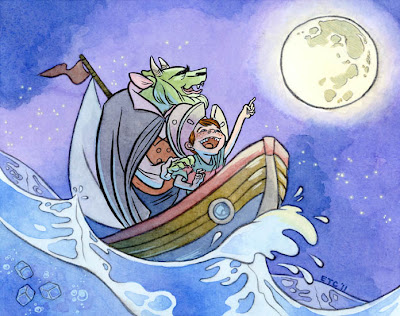 A couple months ago, I was commissioned to illustrate a quirky little boy named Jackson for his grandparents' Christmas gift. Now that I'm certain they've seen their present, I can share it with you! His mother, Amy, sent me some photos along with a description of Jackson's personality and interests, as well as some inside jokes between him, his Nana, and his Grampy. The key elements I took away:

1. Jackson loves water (the beach, pools, water parks, etc.)
2. Jackson says to Nana: "I love you to the moon and back."
3. Grampy is a prankster: he tosses ice cubes on him when he's in the tub and freaks him out with a "Dracula voice."

Also, I happen to know a particularly funny anecdote involving Jackson, his head, and a toilet seat.

So I got a Wynken, Blynken, and Nod kind of idea in my head and went with it! I hope that the painting made Nana and Grampy's Christmas a little brighter.
Posted by ETCIllustration at 8:04 AM