False face must hide what the false heart doth know. 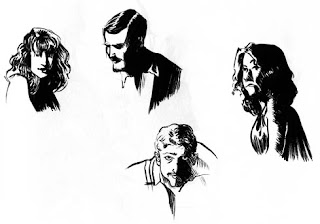 Hello, hello! As you can plainly tell, I've been updating somewhat infrequently lately. No excuses, I know I need to try harder.

Above are some sketches with the brush pen of actors from Sleep No More, the kickass theater production based on Shakespeare's Macbeth and Hitchcock's Rebecca. I saw it a week ago tonight with my husband and his coworkers, and I've done nothing but geek out about it since I got home from the theater. I could go into details, but I think it can be described more clearly here, or here, or even here. I've been so inspired by the performance that I've read Macbeth for the first time (don't be so shocked, we read Hamlet in high school) and I've decided to do a series of illustrations focusing on the devil herself, Lady Macbeth, and the witches who tempted her husband and, in turn, tempted her. The play creates these self-inflicted gender boundaries, especially by Lady Macbeth, who at one point asks God to "unsex" her so she may have the courage to commit murder, and who later chides her husband for being unmanly when he expresses remorse for his crimes.