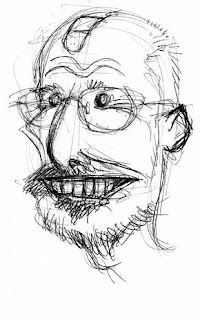 Robert Kaufman passed away on Friday, January 8th. We weren't friends or anything; but he was the dean of the illustration department at AIB and one of my professors when I was in school. He built the illustration and animation curriculums at AIB and he, personally, helped me get my college scholarship. He called me himself to give me the news.

When I was a freshman he let me take his Drawing For Illustration class, even though it was an upperclassmen course. He taught me to draw more expressive fingers. As a senior (perhaps ironically) I would take one of his electives, which was primarily filled with underclassmen. It was in this elective course, Character Design, that I drew this sketch of Robert. I had thought that the band-aid on his head was to cover up a zit or something, so I thought it was funny; I didn't realize until a bit later that it was to cover up a spot of skin cancer.

Is the drawing inappropriate now? Disrespectful? I don't know, but Robert seemed to get a kick out of it at the time, band-aid and all. So I'm posting it in his honor. I, along with plenty of other illustration students, have Robert to thank for our education. Rest in peace, Mr. Kaufman. You will be missed.
Posted by ETCIllustration at 8:29 PM